The previous three parts of this series focused on how to combine layers and scenes to present and view two (or more) design options for the same space. (See Part 1, Part 2, and Part 3.) This last post focuses on a similar scenario – comparing material options for one part of a model. This requires the use of groups.

Specifically, I want to try out two different counter materials in a kitchen. 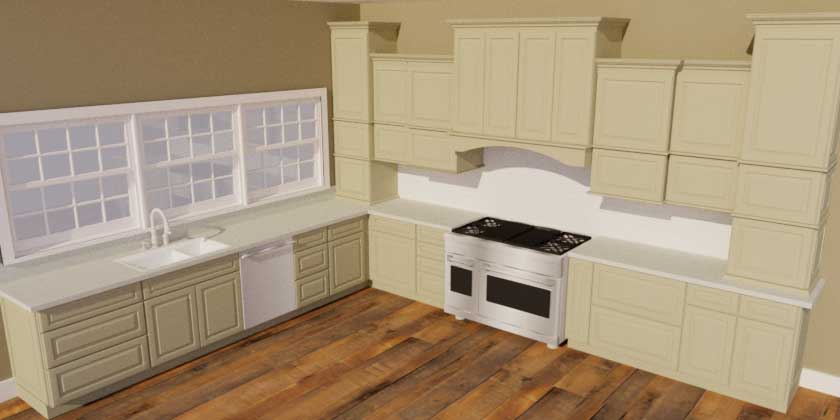 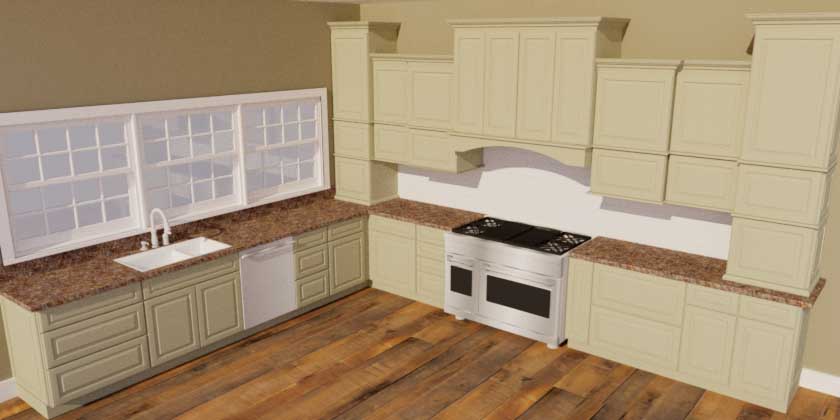 The model I’m using comes from the many KraftMaid kitchen models available in the 3D Warehouse. I chose “New Traditionalist Kitchen” because it’s a nice-looking model, but also because it’s set up in a such way that I can easily demonstrate why groups are necessary for this technique. 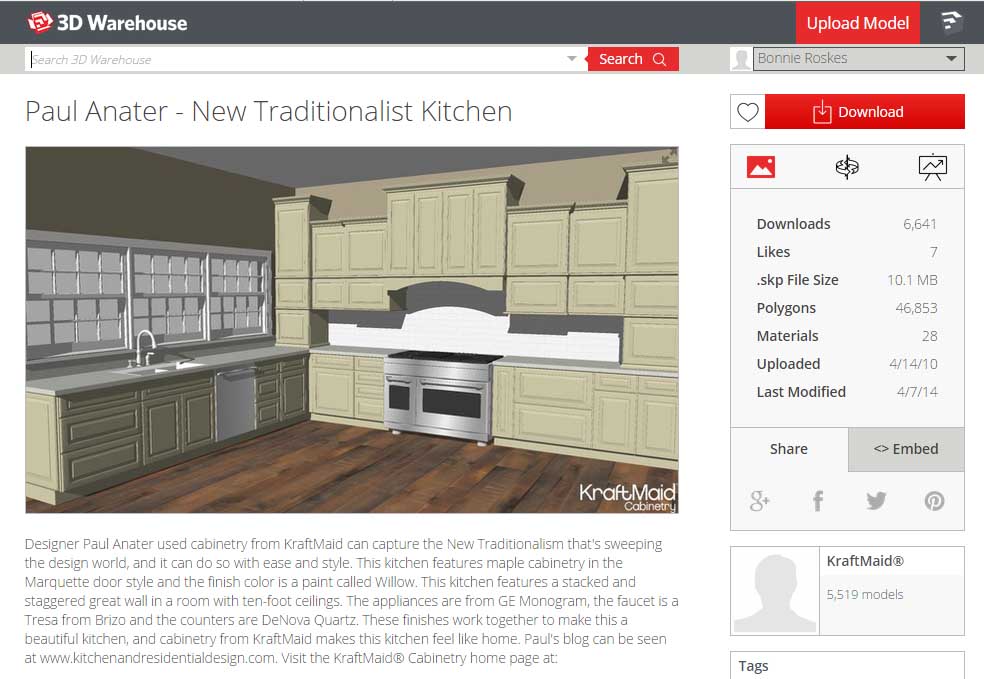 Here’s the model in SketchUp, with edges turned on and shadows turned off. I want to focus on the counters. But when I select one of the counter faces, I see that the counters are part of a group or component. And this group or component also includes walls, and some of the moldings above and between the wall cabinets. (Not the most logical grouping – counters and walls and carpentry should each be in separate groups.) 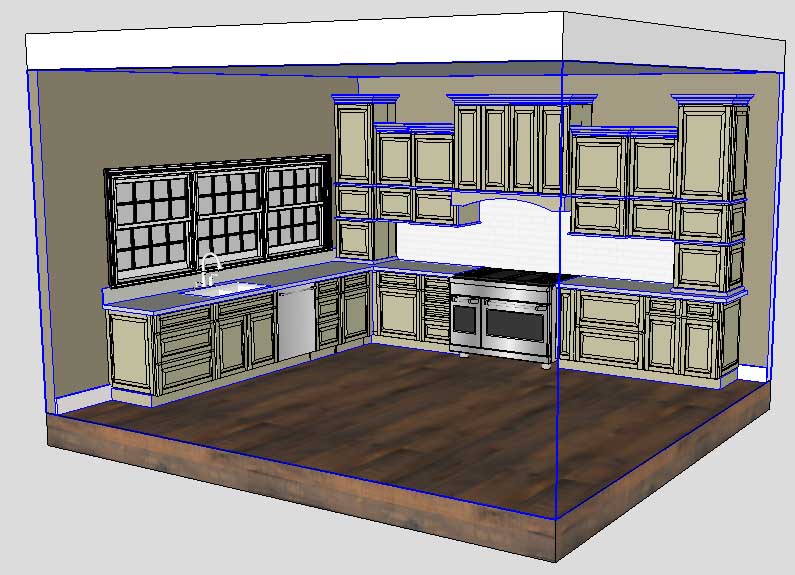 To find out what’s going on with a model’s groups and components, the Outliner is where to look (Window / Outliner, or Window / Default Tray / Outliner). The group that includes the counters, shown as selected in the image above, is also highlighted below in the Outliner. 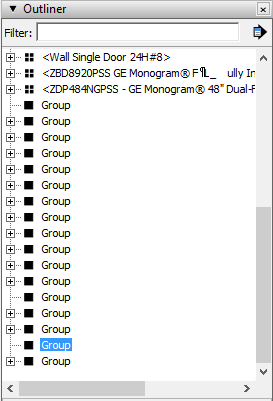 After exploding the group (you can right-click on the group itself or on its name in the Outliner), each counter face can be selected as its own object. So for now the counter is made up of loose geometry, a no-no in SketchUp modeling, but we’ll change that a bit farther on.

This model already has several layers, and we’ll leave those in place. But create two new layers, one for each countertop material. The current material is white quartz, so the current counter will end up on the new “White Quartz Counter” layer. And I’m adding a “Brown Granite Counter” layer for the other counter I’m going to add. 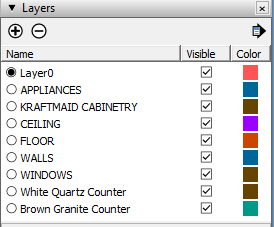 To select the entire counter, right-click on any counter face and choose Select / All with same material. 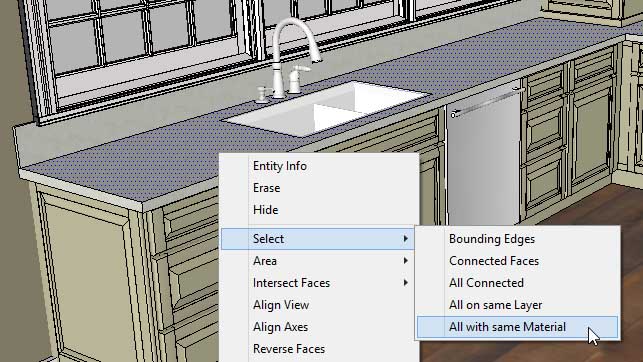 Check to make sure all counter faces are in fact selected.

With all counter faces selected, move them from the “WALLS” layer (not sure why they were placed there) to “Layer0.” 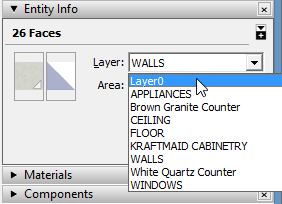 Now I hear you asking: Why put the counter on “Layer0” and not the new counter layer I just added? Good question, and the answer’s a little complicated.

All SketchUp objects are supposed to reside on one and only one layer. But you can get around this rule (and confuse and complicate matters) when loose objects are on one layer but the group or component that contains those objects is on another layer. This can get messy fast, especially when groups are nested, etc.

So if you follow this rule, you’ll be set for life:

All loose geometry – all edges and faces – must reside only on Layer0. All groups and components can reside on their specific layer.

(Be sure to check out my blog post on this topic – The Sacred Layer0.)

So. . . keeping that rule in mind, make a group from the selected counter faces.

Now copy the counter group into blank space. To make it easier later to move the copied group back into place, copy it in a specific axis direction (red or green) by a specific move distance. In my example, the copy is placed 20′ from the original, in the green direction.

Open the copied group for editing, and change its material. Tip: if you keep the Shift key pressed while painting, you’ll paint all faces at once. 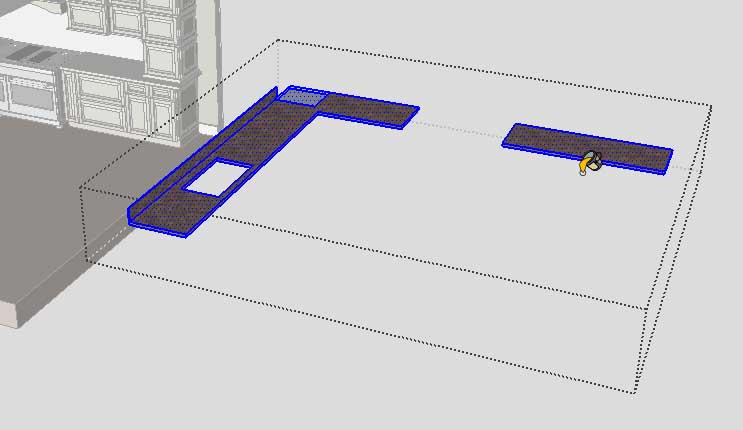 Now comes the part you’ll recognize from the previous parts of this series: Place each counter group on its own layer.

Move the copied group back to where it came from.

Now we have two identical counters in the same spot. Which brings me to this important point: loose geometry in SketchUp cannot share physical space with other loose geometry. Even if you hide a face, you cannot create a different face in the same spot; you’ll get an error message. The only way to have two counters – to have two objects that share physical space – is to separate them from one another as groups or components.

With only the white quartz counter group showing, create a new scene (in addition to “Scene 1” that’s already there). As before, don’t include Camera Location. 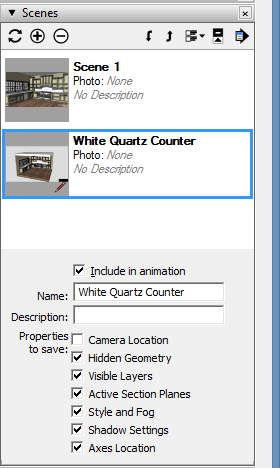 Switch the visible counter layers and create a new scene showing the other counter.

Now you can switch between scenes, in any camera view, to see which counter you (or your client) like better.

Here are some rendered views for an even better comparison: 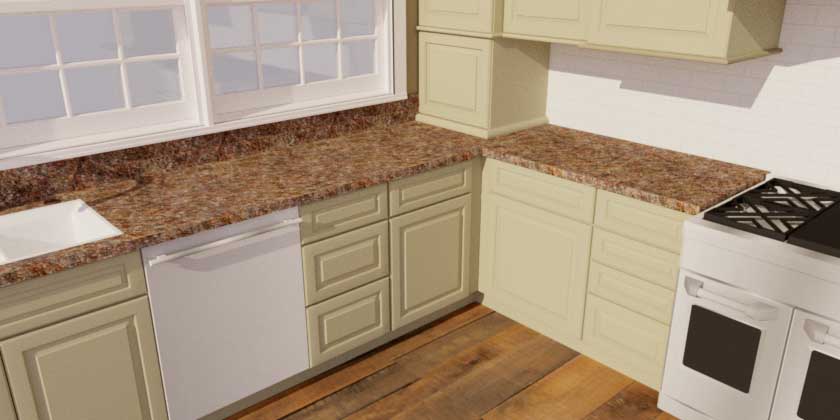 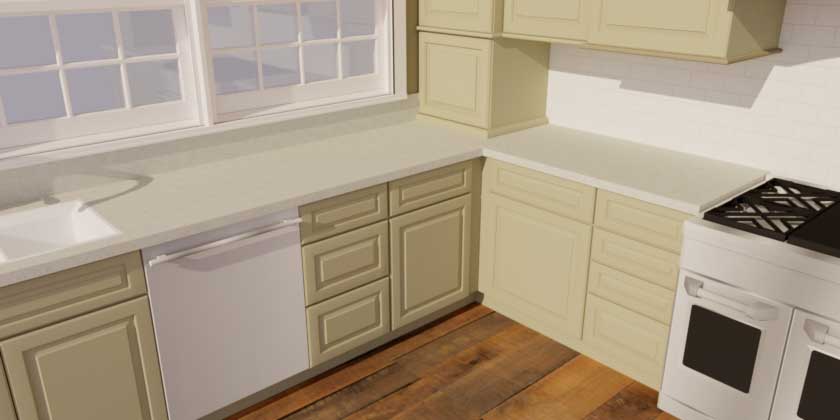 Did you find this tutorial series useful? These techniques, and many more like them, are detailed in my book Modeling with SketchUp for Interior Design.