I love, love, love the CLF Shape Bender extension (by Chris Fullmer, available in the Extension Warehouse). It does lots of things, but one of my favorite things to do with it is to bend 3D text along a curve.

(If you need to learn how to find and install an extension from the Extension Warehouse, see this post.)

In this two-part series, I’ll show how I started with this model of a coffee shop, which features a curved counter . . . 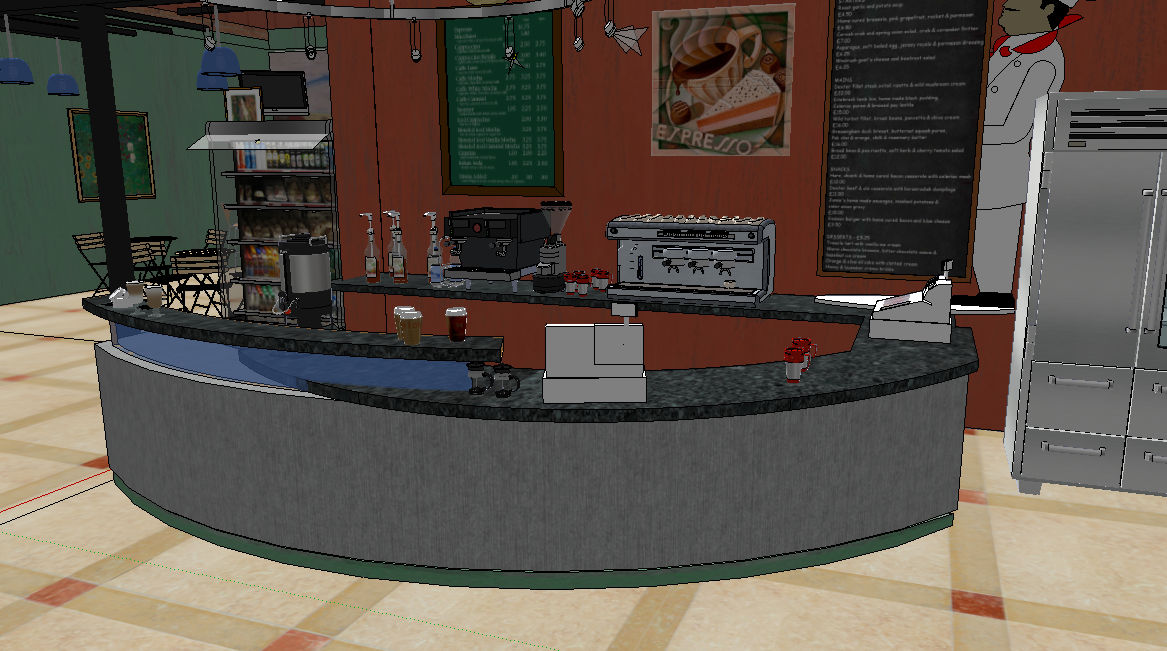 . . . and wrapped text to fit along the counter: 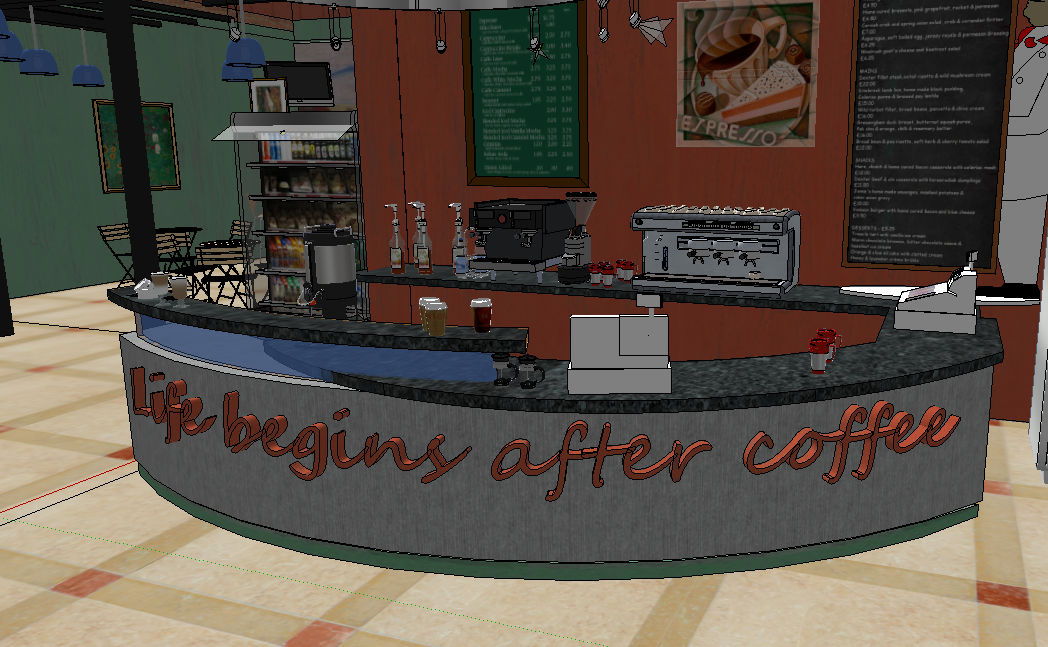 (At the time I’m writing this, using SketchUp 2016, Shape Bender hasn’t been officially updated for 2016. But I installed it anyway and it seems to work just fine.)

What You Need for Shape Bender

And you must be careful about axes and location – the reference line must be in the red direction.

When working with groups and components, which have their own sets of axes, it can get very complicated to understand where things are, relative to model axes. So I’ve found that the cleanest way to bend something is to start a new file and do the bending there. Then the bent objects can be brought back to wherever you need them.

So with that in mind….

Here’s how I got the curve along which the text will be bent.

In the coffee shop model, I drilled down into groups and nested groups, till I was able to select just the curved front face of the counter. I copied this face (Ctrl + C). 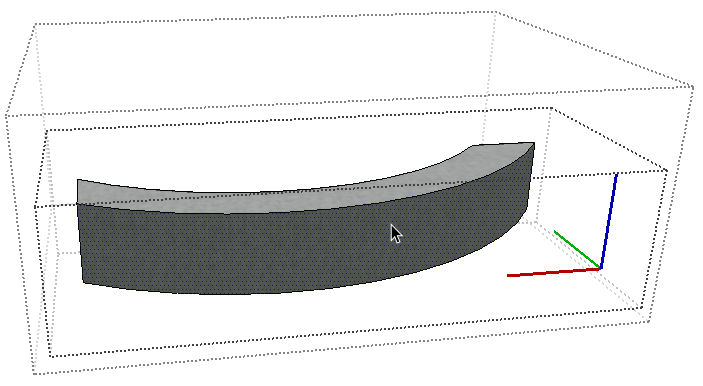 I then started a new file, and pressed Ctrl + V to paste in the copied curved face. 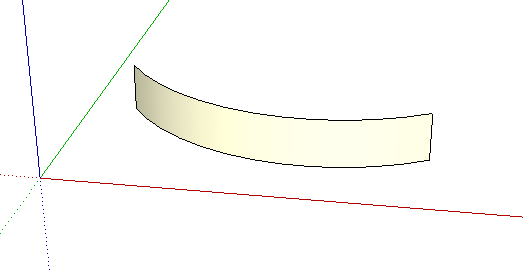 The bending curve can be obtained from this curved face. I copied the lower edge of the curved face forward, in the green direction. I used a copy distance of 100 inches (or 8′-4″). This known distance will make it easy later to move the curved text back against the curved face. 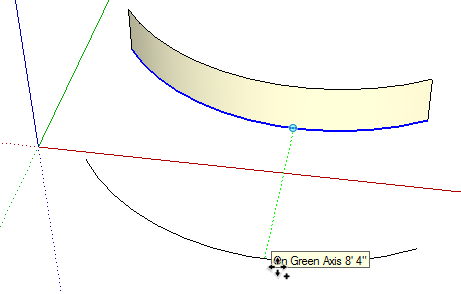 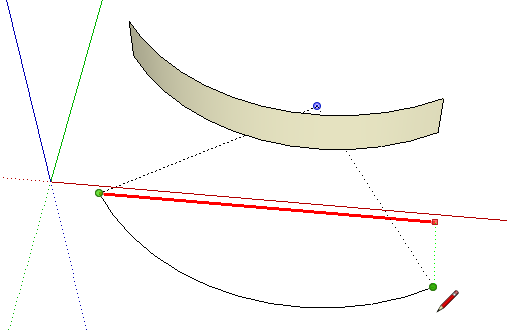 The object I want to bend is 3D text, and I want this text to be vertical. And it’s easiest to create vertical 3D text on a vertical face. So I added three more edges to my straight line, creating a vertical face exactly as high as the curved face.

Looking at these curves and lines from more of a top view, you can see that both the curved and straight faces have the same overall width. 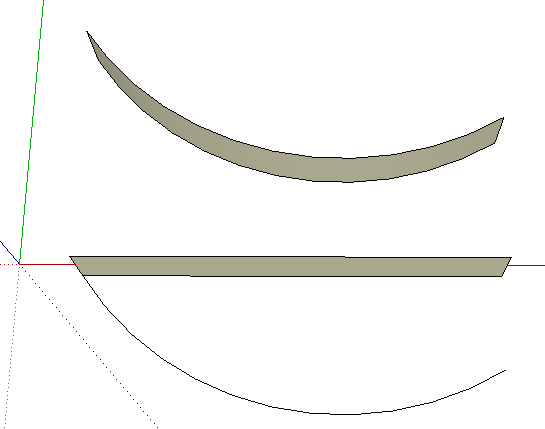 Using the 3D Text tool, I added to the vertical wall some text fitting for a coffee shop counter.

Back to that straight reference line: it needs to be a stand-alone line, not attached to anything else. So now that the text is created, and I no longer need the vertical face, I erased all of that face’s edges except the top one. (If I had left the lower edge, it would be connected to the reference curve, no good.) 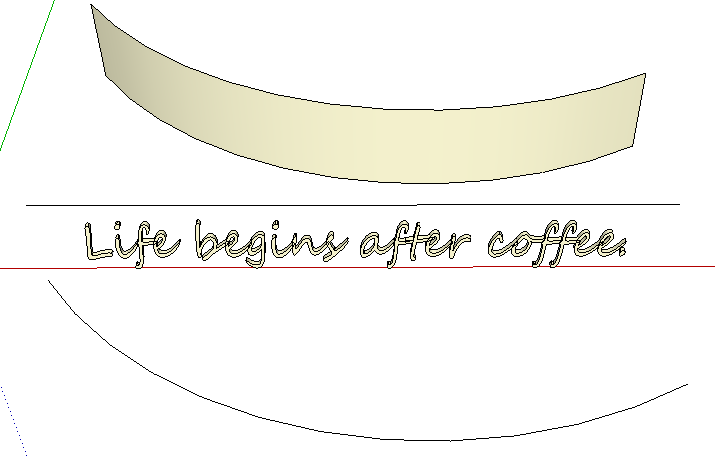 So I have all three objects needed for Shape Bender to work: curved line, straight line (the line above the 3D text), and the 3D text itself. Next, in Part 2, I’ll show how to bend the text, and place it back in the coffee shop model where it belongs.