In Part 1 of this series, Daniel showed how important it is to have SketchUp shortcuts set up. SketchUp provides a good number of default shortcuts, such as the L key for the Line tool, the Spacebar for the Select tool, etc. And Part 1 also showed how you can set up shortcuts for other tools that SketchUp has left shortcut-free, such as the Polygon or Rotated Rectangle tool.

But many SketchUp users don’t realize that shortcuts can also be used for display settings, which can be extremely handy.

These are the display properties that can be set in the Styles window, such as the Face Style settings (Wireframe, Shaded, etc.) and Edge Style settings. Most of these properties are also found in the Camera and View menus. 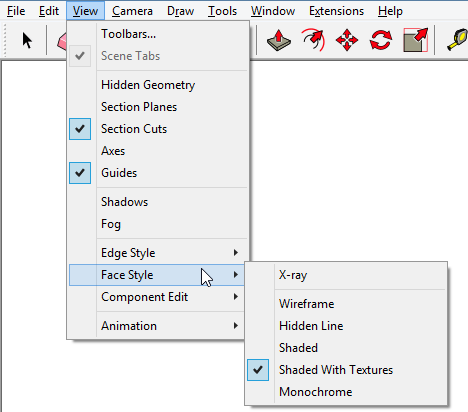 Or how about or the Component Edit settings: while editing a component or group, it’s great to be able to hit a key and have the rest of the model disappear or come back into view. 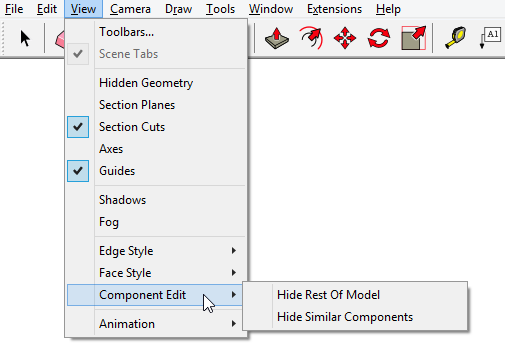 Yes, you can display toolbars for most of these commands, but for me, clicking an icon is almost as annoying as scrolling through menus. Shortcuts are essential for me.

So in this post, I’ll give you a tour of some of the display shortcuts that make my day easier.

As an example, I frequently use Monochrome view to check 3D printing models for watertightness. (For a proper STL file to be created, all outside faces must be facing outward.)

So in the System Preferences window (found in the Window menu on a PC, the SketchUp window on a Mac), I opened the Shortcuts page. Each function is listed according to how it appears in the SketchUp menu, so this function is found under View / Face Style / Monochrome. I placed my cursor in the Add Shortcut field, pressed the Alt and M keys together, and clicked the “plus” icon. 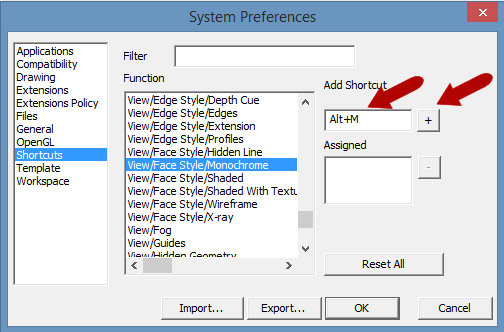 If that shortcut is available, it will appear in the Assigned field. (If the shortcut is assigned elsewhere, SketchUp will let you know.) 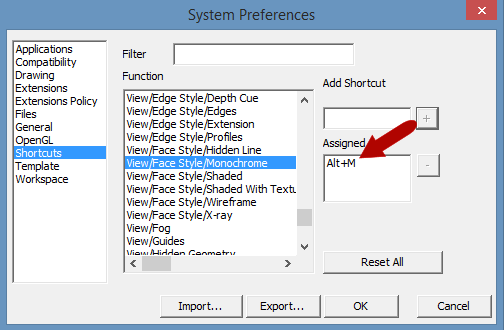 The other face style shortcuts I set up are:

Once you click OK in the System Preferences, making your shortcuts official, the shortcuts will appear in the SketchUp menus. 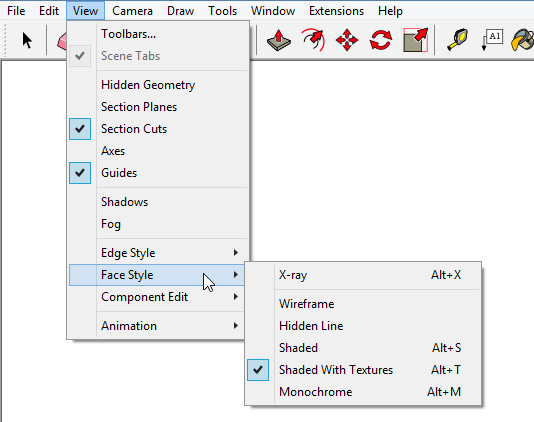 So now if I have a SketchUp model like this one, which has every face painted with a color or texture . . . 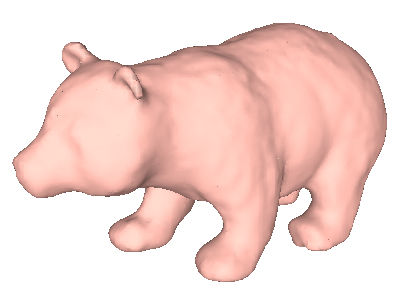 I can press Alt+M to switch to Monochrome, which shows that some faces are actually reversed (the gray ones below). 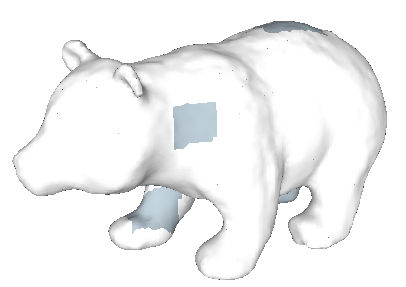 I can then fix what needs to be fixed, then press Alt+T to go back to Shaded with Textures.

(A note for PC users: The Alt modifier key is used by Windows as a shortcut for opening a menu. For example, in SketchUp, press the Alt key and you’ll see the “T” in the Tools menu underlined. This means you can press Alt + T to open open the Tools menu. But if you assign Alt + T in SketchUp as a shortcut for something else, that will take precedence over the default Windows shortcut.)

Shortcuts for Mac users work the same way. Though for some reason, the functions don’t always appear alphabetically (maybe a setting I don’t know about?) For example, I didn’t see View / Face Style where I expected, at the bottom of the list, but it was listed near the top. Weird. Anyway, the shortcut itself is entered in the field at the bottom, then appears in the Key list. 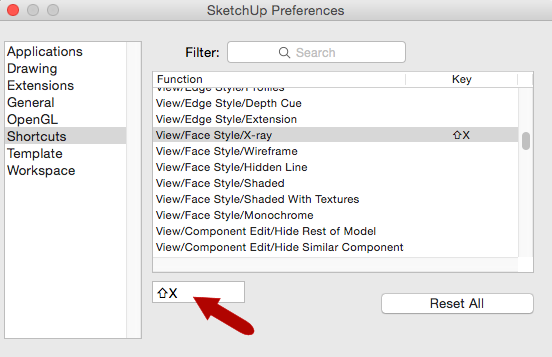 More of my Favorite Shortcuts

Here are some more display shortcuts I rely on.

I use the Ctrl keys for the standard views: Top, Front, Back, etc. (I try to match letters: Ctrl+F for Front, etc.) 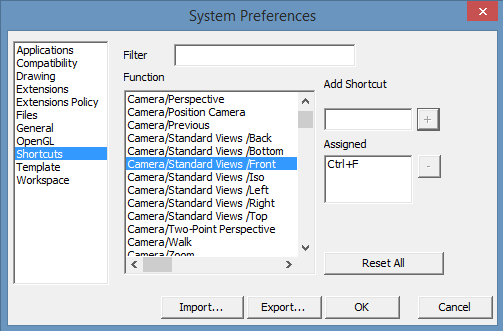 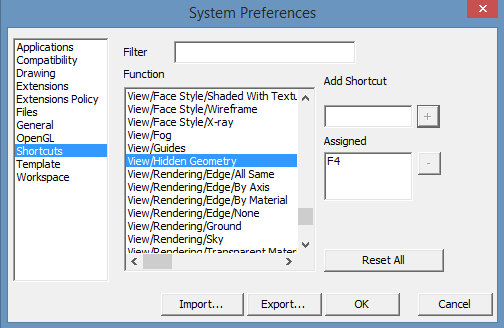 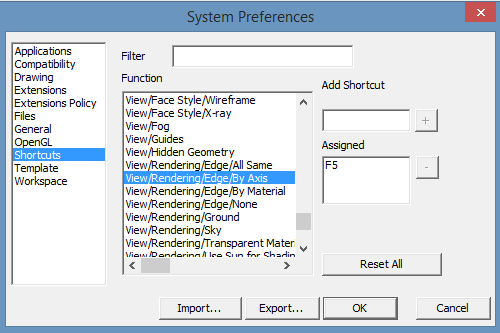 The By Axis command doesn’t appear in any SketchUp menu, only in the Styles window. So this shortcut lets me avoid opening that window all the time. Look in your function list under View / Rendering to see what other commands you can access with shortcuts.

With By Axis turned on, any black edges that appear now are NOT going in an axis direction – makes things easy to fix. 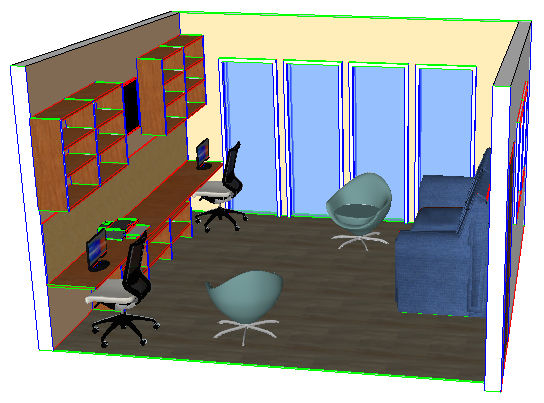 I have F6 set up to go back to All Same (black) edges. 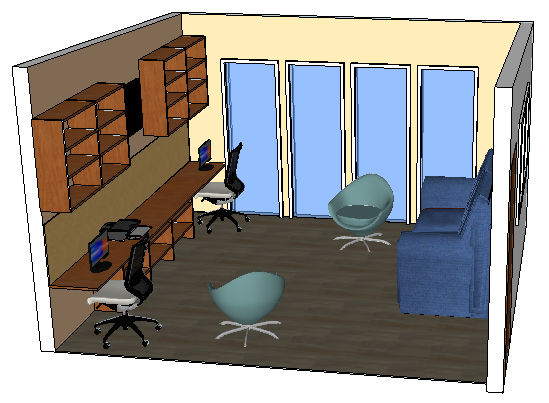 And I have F7 set up to toggle edges on and off (in the function list as View / Edge Style / Edges). 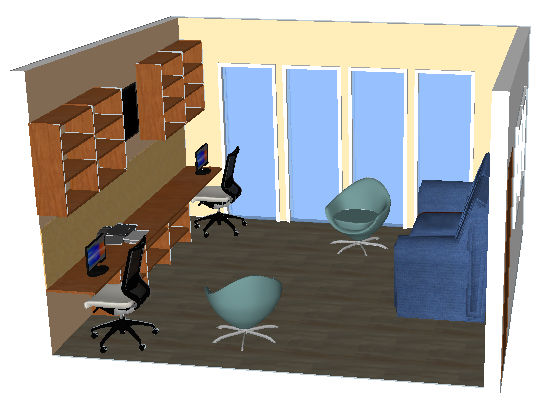 I often turn shadows on and off for rendering, so Alt + H toggles shadows. 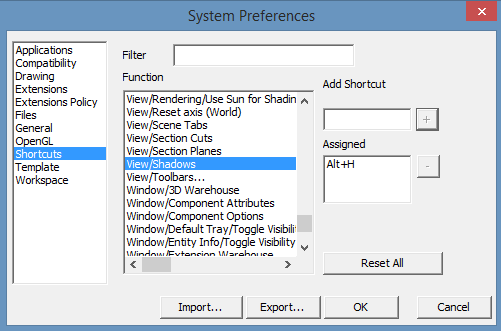 There are many more I use, but you get the idea.

And here’s another nice feature (which was also mentioned in Part 1):  if you have a set of shortcuts that someone else wants to use, you can use the Export and Import buttons for sharing (at least on the PC, I’m not sure if that can be done on the Mac). 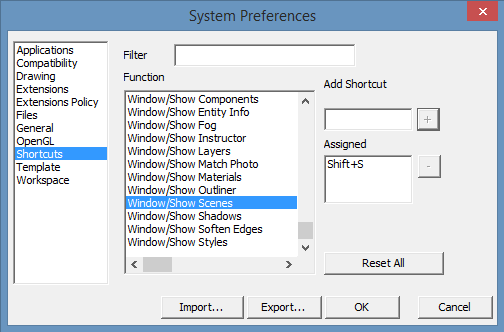 If you’re a SketchUp 2016 PC user, our next post is for you: setting up trays (and shortcuts) for your UI windows.