Extensions for SketchUp are amazing.

I remember using my first SketchUp extensions when third-party add-ons were just introduced, way back in the SketchUp 4 days. SketchUp was still a start-up at the time (anyone remember @Last software?). And in those days, you had to install extensions via a cumbersome, somewhat geeky process requiring some coding knowledge. Since then, extensions have become much easier to find and incredibly easy to install. And these days I rely on extensions for just about everything I do in SketchUp.

Extensions are the equivalent to an almost endless supply of tools, options, features, renderers, and just about anything you can imagine that can be plugged into SketchUp. Like apps for your smart phone, extensions are apps for SketchUp. I still get a geeky thrill when I discover a new extension, or when someone sends me a link about a cool new tool. It never gets old.

Which is why I’m constantly amazed by the SketchUp community’s lack of extension knowledge and usage, even among long-time SketchUp power users. The percentage of users that have dabbled with extensions, even a tiny bit, remains pretty low. I suppose that to the uninitiated, extensions can seem daunting and intimidating.

But you really ought to shake off your fear and …..

Try Out Some Extensions

Once you’re out of the newbie SketchUp stage of checking out all of the native tools, branch out and start trying out some extensions.

Here’s an easy way to get started: In SketchUp choose Window / Extension Warehouse. Do a search for something you’ve heard about, or just look at the list of top extensions for your industry. 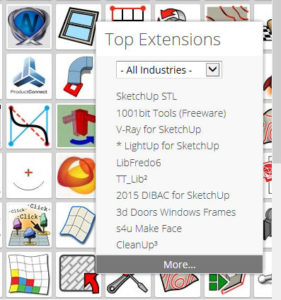 I’d start with something simple like Angle Between Faces, or Grid Tool. For something more robust, try 1001bit Tools – among other things, this utility belt of an extension automates the creation of pitched roofs, walls, louvers, framing and windows. (See my write-up on 1001bit.)

If you become a member on my website, (which gives you access to some tutorial videos as well), I provide some suggested extensions I like to use.

And keep checking this blog! Bonnie and I plan on regularly posting extension tutorials, reviews and updates.

So, as promised by the title, here are five reasons why extensions will make your skies brighter.

Less work, less fussing, faster results = Happiness. You will be less frustrated trying to get the native tools to do something an extension can do in a couple of clicks. For example, filleting edges of a box in SketchUp requires you to draw several tangent arcs and push them down. SketchUcation’s Round Corner extension does the same thing with a few clicks, and even enables you to make changes. Plus it’s dang cool to watch in action, which always helps with the happiness factor.

This video shows an older version of the extension, but it’s by the author, Fredo6:

Extensions can automate the generation or editing of very complex objects, such as stairs, houses, terrain, walls, roads, vegetation, piping, buildings, roofs, fences, grades, the list goes on and on.  I use Profile Builder Pro, for example, to quickly model accurate roadways, bridges and viaducts.  And check out Vali Architects’ aptly-named “Instant” series of extensions, for quickly generating complex roofs, walls, and roads.

Things you need to do tediously by hand in SketchUp can be sped up immensely with extensions. Want to quickly select certain objects or components at once, with a couple of clicks? Learn to use Selection Toys, a must-have extension. And JF Add Layer is essential when working with SketchUp scenes for views or workflow, enabling you to control when a new layer is visible in an established scene. (Try updating a million scenes manually, eek.) An example: It can take you looooong hours to clean up an imported 2D or 3D CAD file. The Cleanup3 extension, coupled with some efficiency by you, can reduce this time to mere minutes (depending on complexity). My book, SketchUp For Site Design, reviews a complete design process including extensions that speeds up the modeling from imported CAD files. These include Extend Close Line, Delete Short Lines and Make Faces, all by Smustard.

The new two posts will give an introductory tour to two of the main resources for extensions: the Extension Warehouse and SketchUcation.

And check back often for more info and examples of SketchUp extensions.