Here’s what I’ve written about so far in this series: In Part 1 – a 3D printed bear, and in Part 2, a few 3D printed cactus trees.

This post will detail the most complicated of the objects I printed for this project: a customized boat.

Maid of the Mist

My son, whose state you’ll recall is New York, made a hand-drawing of Niagara Falls. But it was a little hard to tell what the drawing was, so I suggested he add the Maid of the Mist – the two-level boat that takes raincoat-clad tourists out into the falls.

There was nothing that looked like this on Thingiverse. There were a few decent models in the 3D Warehouse, but they’d all require tons of work to make print-ready. So I downloaded this simple boat from Thingiverse: 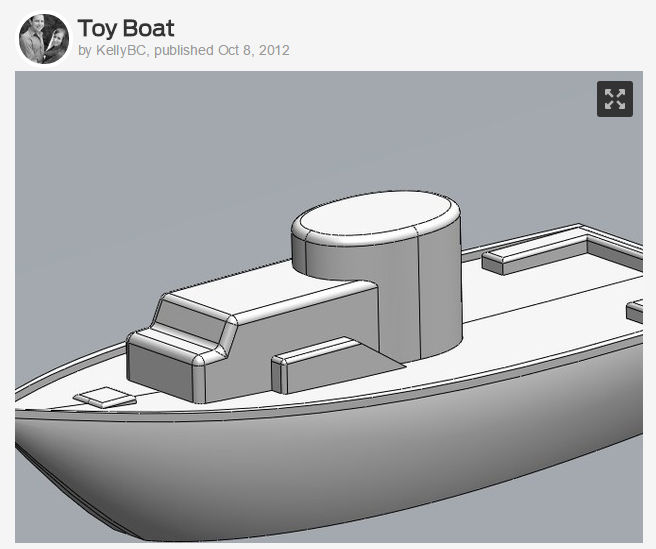 The trick was adding the “Maid of the Mist” text along the side. (And I hope I’m not violating any copyrights or patents – it’s only for a third grade project!) Because the boat has a curved side, I can’t just add 3D text (which is linear) and stick it on the side. I need to curve the text to match the curve of the boat.

There are two extensions I used for this, and both are available for free in the Extension Warehouse. (If you need, see our post on getting Warehouse extensions.)

Here’s the boat STL file, imported into SketchUp, with its edges softened.

I wanted to copy one long curve along the middle, which best represents the boat’s curvature. So I showed hidden edges (View / Hidden Geometry), and carefully selected the chain of edges shown below in blue (look closely to see): 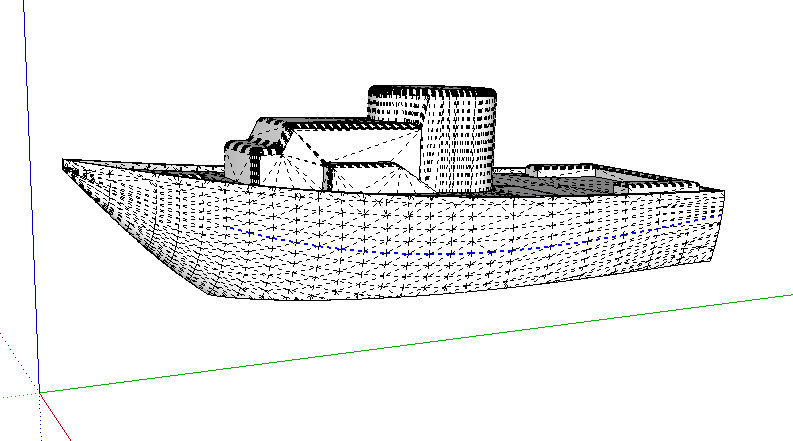 These edges were copied straight out, in the red direction. 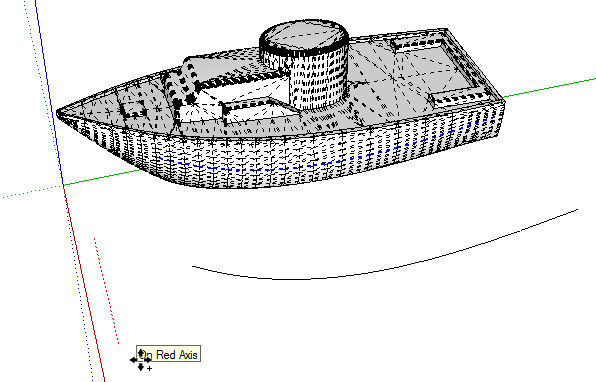 To make these edges non-hidden, I used the Eraser with both the Shift and Ctrl (Option) keys pressed together, passing over the entire chain. Without this step, the copied edge chain would disappear when hidden edges were turned off. 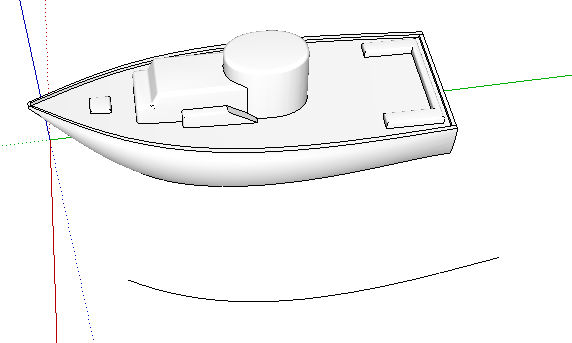 The curved chain of edges is needed by the Shape Bender extension, for bending text to fit the curve. But Shape Bender requires that the reference geometry go in the red direction. So I rotated everything 90 degrees, so that the side of the boat and the copied chain of edges were more or less parallel to the red axis. 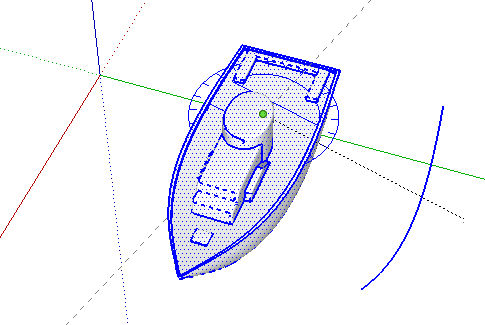 Here’s where the Weld extension comes in. Shape Bender requires that a single curve be selected, not a chain of connected edges. So I needed to join the edges into one long curve (called a polyline).  To do this, I selected all the edges to join together, and chose Extensions / Weld.

Now I’m ready to add the text. First, I added a vertical wall next to the boat, for the text to adhere to. The text tool can be found in Tools / 3D Text. After placing the text, I used the Scale tool to fit it to the wall. 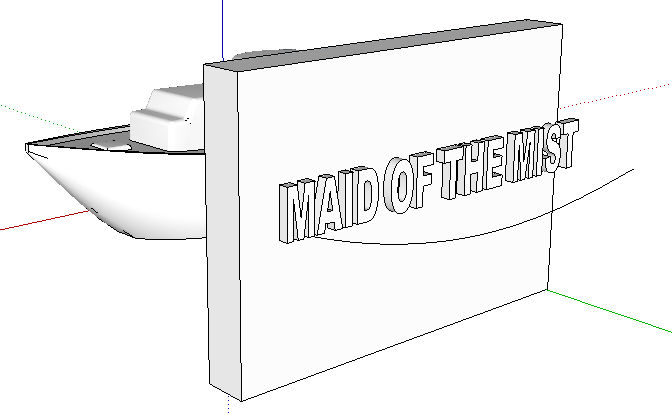 To make the text a more perfect fit, I switched to a head-on Front view. I also switched to Camera / Parallel Projection, to eliminate the visual distortion you get in Perspective view. Now I could adjust the text so that it more or less followed the curve. 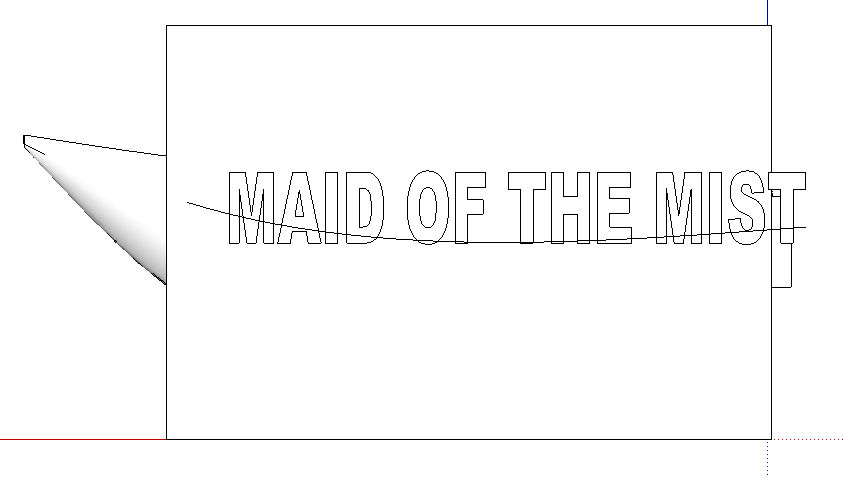 The vertical wall was no longer needed, so goodbye.

There’s just one more object needed by Shape Bender – a straight reference line, in the red direction, that defines the start and end of the bending. My line is shown by the arrow below.

Now I could start bending. First, I selected the group or component to be bent: the 3D text (created as a component). 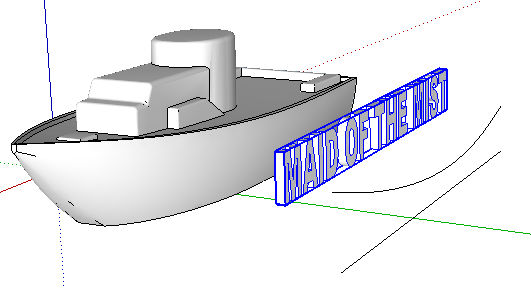 The next two clicks were the straight line and the curve. The results are shown first in green as a preview. If the two start and end points aren’t aligned, you get a weird result. Which is why you can toggle your results using the Up and Down arrows. I had to press both arrows a few times to get this correct result: 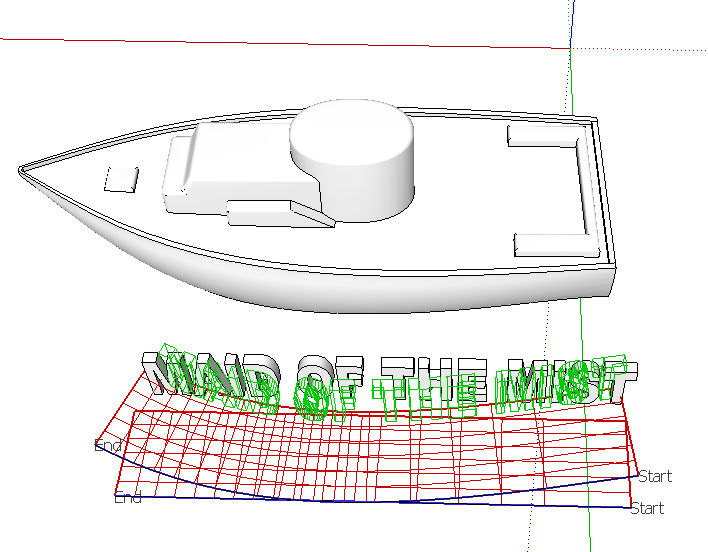 When the preview looked right, I pressed Enter.  I erased everything but the bent text, which I moved back against the boat. This required some fine-tuning; I had to rotate the text a bit, slide it right and left, and after several iterations it looked pretty good. If you try this yourself, be sure to check all around your text, to be sure that nothing’s sticking out at the ends.

I sized the overall boat length to 3 inches and printed. It turned out beautifully, I have to admit! 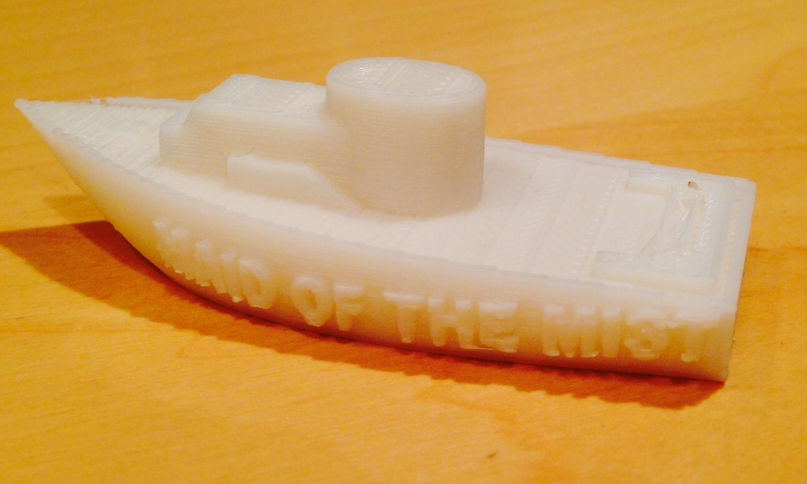 My son took a Sharpie to the boat, to make the letters stand out. Here’s his completed diorama, with the Maid of the Mist and the bear from Part 1. It also includes the Empire State Building, which I downloaded and printed without making any changes. (I printed it in white and he drew windows and colored it blue.) 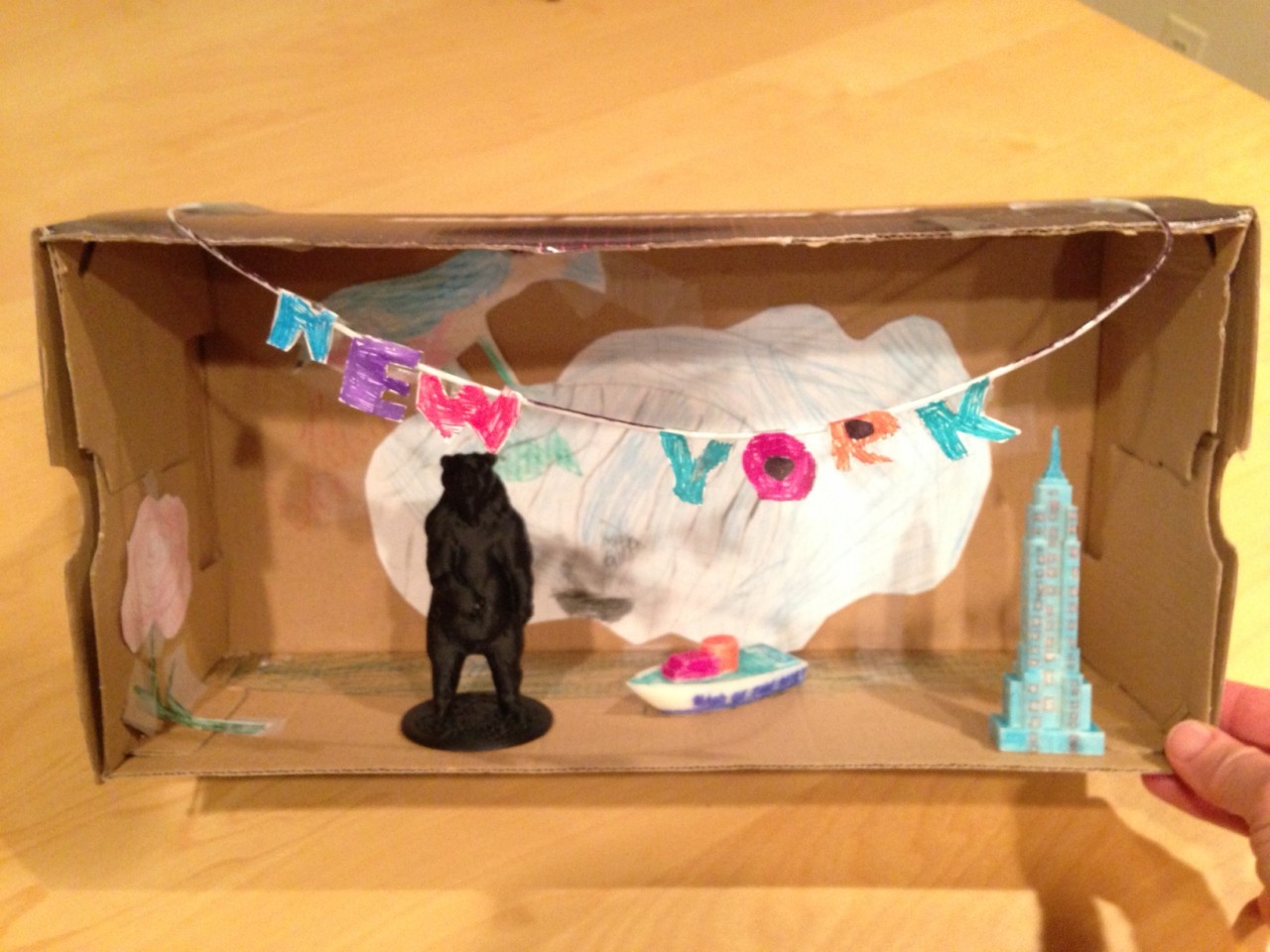 Incidentally, we had the idea to hang the letters of “NEW YORK” from a string across the top. But this is better than string: a piece of plastic from a spool of 3D printing ABS.

Here’s my daughter’s Arizona diorama. It includes the cacti from Part 2, as well as an iguana I downloaded and printed with no changes. She also added some entourage, in the form of Lego Friends. 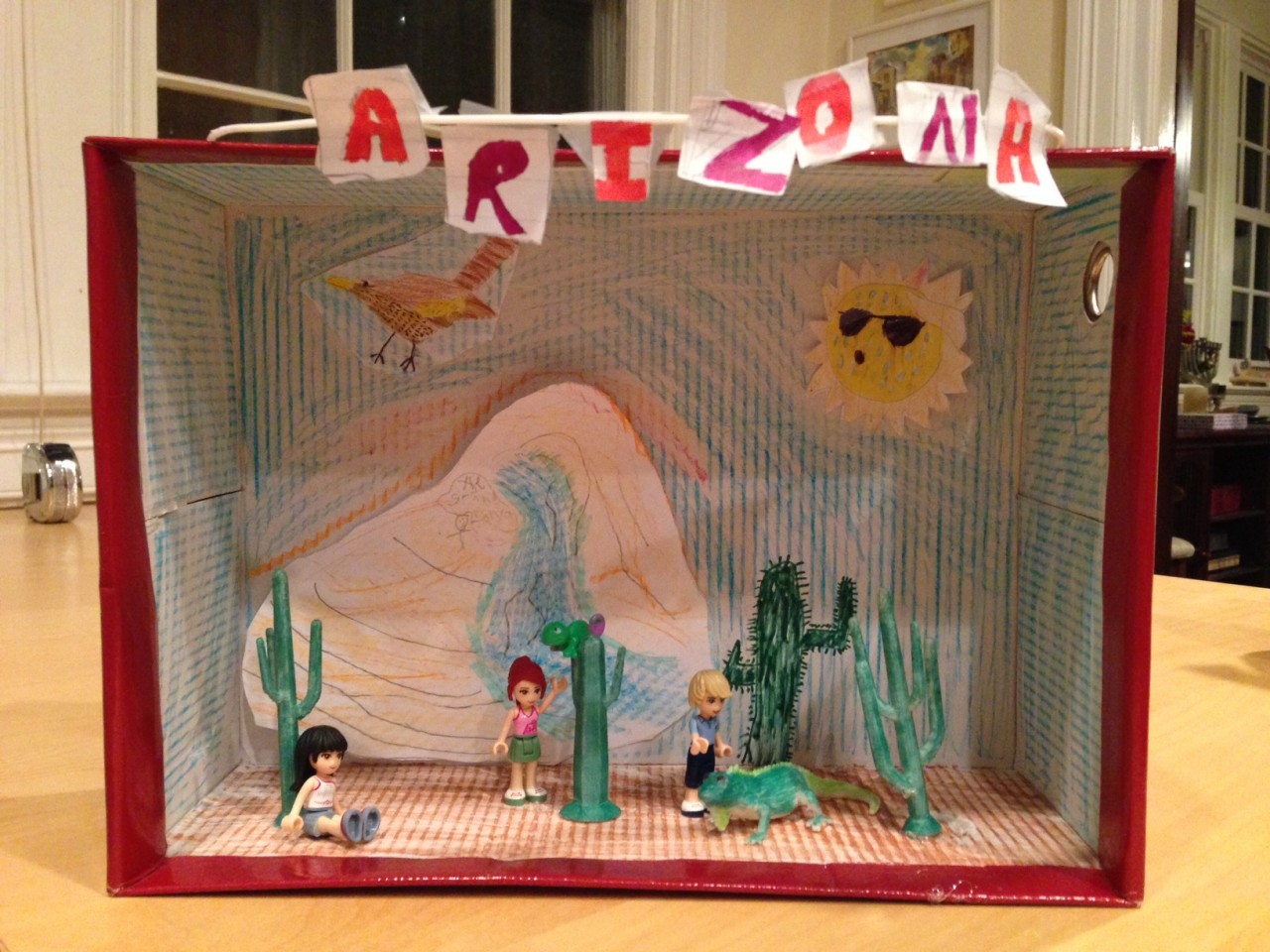 Needless to say, their teachers were impressed with our hard work!