If you’re a PC user who’s using SketchUp 2016, all of your UI windows are now in one or more trays. (In versions before 2015, windows could be displayed separately. Mac still works the “old” way, too.)

This post will show how you can manage trays, create new ones, and set up shortcuts to open specific trays and windows.

SketchUp provides one tray by default, populated with a few standard UI windows. Here’s my default tray, docked to the left side of my SketchUp window. 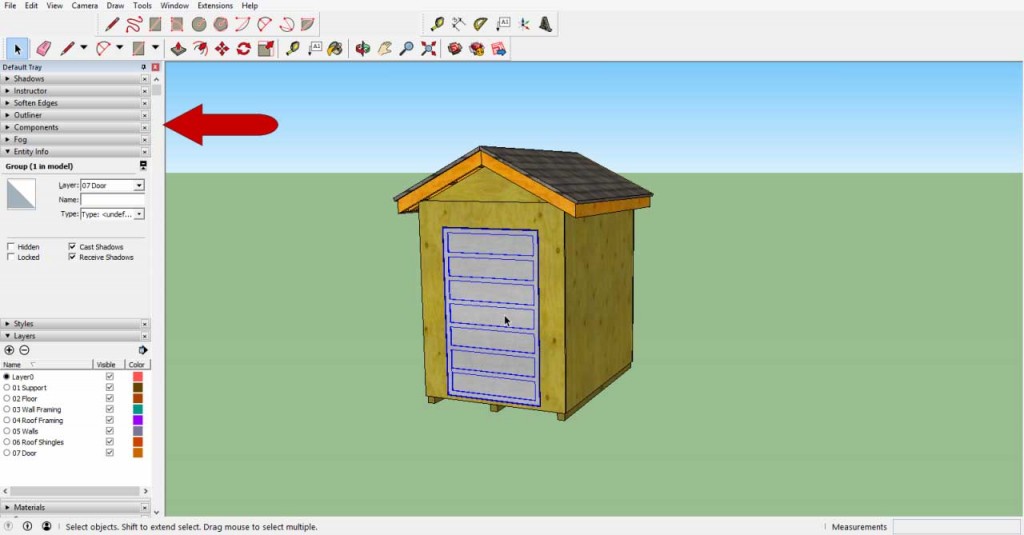 Within the tray you can re-order windows by dragging title bars up and down. You can move the tray itself by dragging its title bar, and you can dock the tray (attach it) by dragging it to an edge of the SketchUp window. The tray doesn’t seem to work well docked to the top or bottom, but left and right docking is fine. Or you can just place the tray anywhere in the middle of the screen. Also, if you click the pin icon in the tray’s title bar, you’ll minimize the tray into a tab – the tray opens when your cursor is on the tab. (I find the minimized tray annoying – I keep mine open or close it altogether.)

Used to be that you could have UI windows wherever you wanted – stacked up with other windows, minimized, or open individually all over the place. (And if you’re a Mac user, none of that has changed, for now.)

I’m not sure yet how I feel about this change. I get that the tray setup is supposed to make SketchUp look and feel more like LayOut, and consistency is a good thing, I suppose. But most SketchUp users don’t use LayOut and won’t understand where this change is coming from.

I’ve been accustomed to my little UI windows for years now, and it’s disconcerting to have this limitation on where they can go. Maybe I just need to get used to it. But if one crowded tray doesn’t work for you, you can set up additional trays to *almost* mimic how individual windows used to work.

First, go to Window / Default Tray. This lists all of the windows that are included in that tray. You can check or uncheck windows on this list. 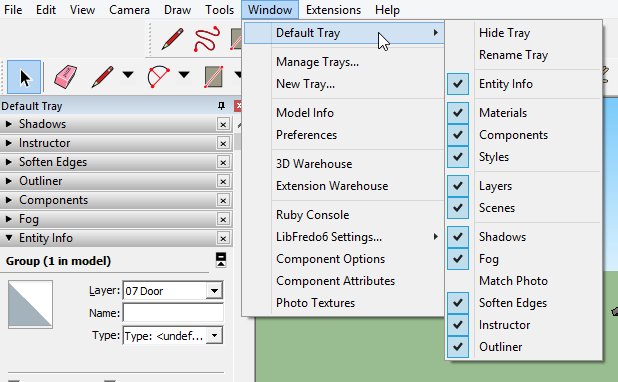 You can also remove a window directly from a tray by clicking its X icon.

I like to have the small but handy Entity Info window available on its own, not as part of the large, default tray. So here’s how to set that up. First, go to Window / Manage Trays. 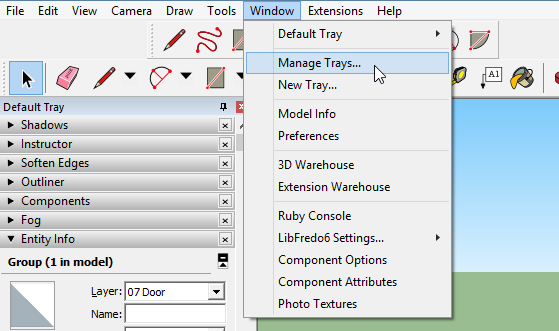 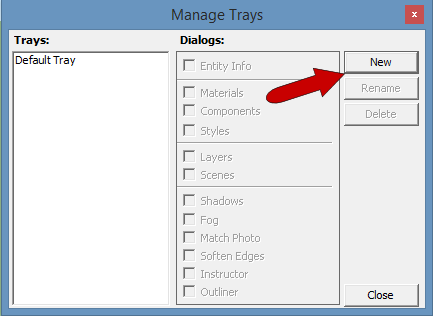 Name the new tray “Entity Info,” and set it to contain only the Entity Info window (windows are called dialogs here). 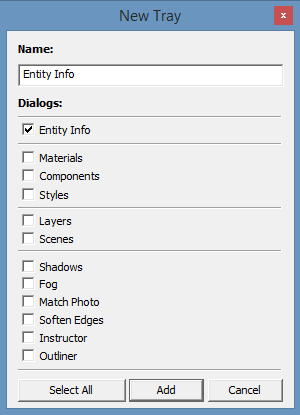 Click Add and that’s all there is to it.

So now I have two trays: Default Tray and Entity Info. Both trays can be accessed by tabs at the bottom of the tray area.

But I don’t want the Entity Info tray located on the left side with the other tray; I want it on its own, in the middle of things. To do that, just drag the tab to wherever you want the tray to sit.

Keep in mind, any window can be assigned to only one tray (or no trays). A window cannot exist in more than one tray. If you’re paying attention, you’ll see that my Entity Info window used to be part of Default Tray, but once I placed it in a different tray, it was taken out of Default Tray.

Before SketchUp 2016, you could set up keyboard shortcuts for opening each UI window. You can still do that, but trays add a level of complication. A shortcut now either opens (or closes) an entire tray, or opens an individual window within a tray. It’s a bit confusing at first, so read on carefully.

Example: For my Entity Info window (not tray), the command in System Preferences is listed as Window / Show Entity Info. For this command, I entered the shortcut Shift+E in the Add Shortcut field, then clicked the “plus” icon. 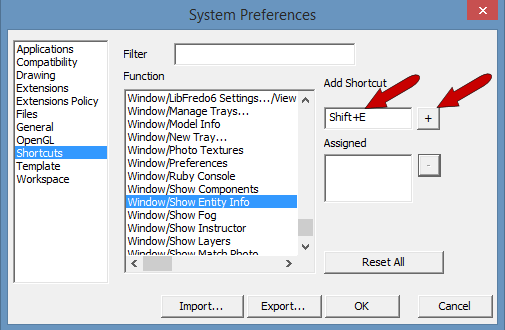 As long as your shortcut isn’t already used by another command, it’ll appear in the Assigned field. 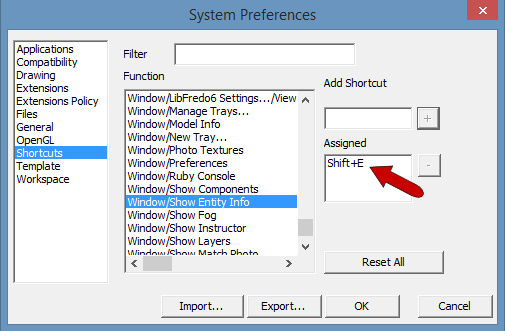 To remove the Entity Info window from the display, its tray must be closed. And you can set up a shortcut for this, too. For this tray display, the command is Window / Entity Info / Toggle Visibility. Since I used the Shift key for the window shortcut, I’m using the Ctrl key for the tray: Ctrl+E. 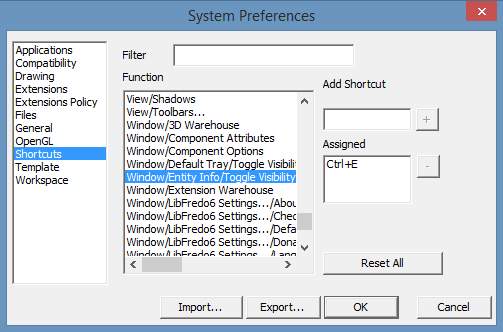 So now if I want to toggle on and off the entire Entity Info tray, I use Ctrl+E. (Which means the Shift+E shortcut isn’t really needed – I just wanted to show the difference.)

The Entity Info tray with its single window is a simple example – any tray can have as many windows as you like. Here’s another new tray I created – it’s called Presentation and includes the Layers and Scenes windows. 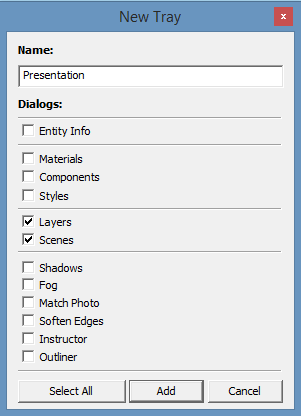 With this tray open, I can easily create a presentation containing scenes that show only selected layers. 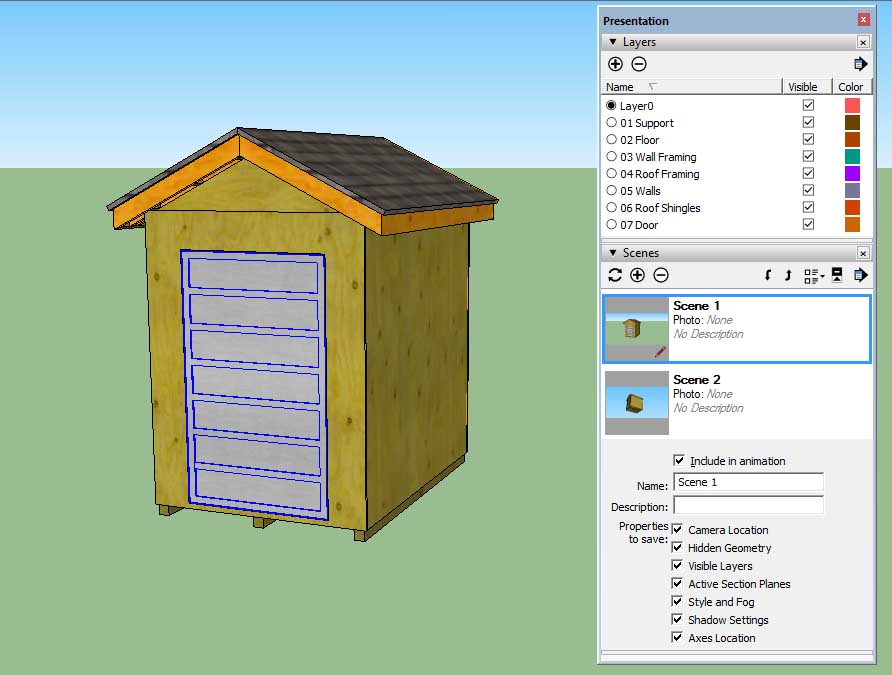 (Good to know: When you have a bunch of trays going at once, the Manage Trays window is your one-stop shop to control which windows are in each tray.) 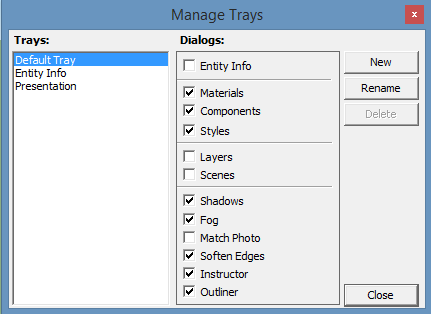 A little cumbersome, but it works.

How do you feel about the new trays?